Holly trees, not just for Christmas

Winter 2010 was an unexpectedly long and cruel winter, in fact I had never known a winter as cold in all my 40 odd years. A lot of plants which had been absolutely fine up until then (and since), typically come through winter after winter with no problems at all. However, in winter 2010 we were hit very hard and many plants suffered or completely keeled over. Plants and trees everywhere you looked in the landscape were effected. 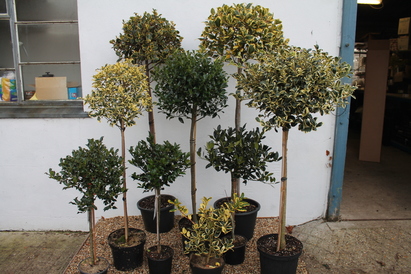 Topiary, particularly standard trees, are an important part of our business. Customers choose trees to grace an entrance, stand on a terrace in a beautiful pot, or for specimen planting. So we needed to think of an evergreen tree suitable for topiary which would be a great alternative to the more usual evergreen standards such as the sweet bay (Laurus nobilis). We also need our trees to be hardy all over the UK, including in salt laden windy coastal areas.

In the first years after the big freeze we stocked the amazing Ilex aquifolium 'J.C van Tol' and I. 'Golden van Tol' both awarded AGM (Award of Garden Merit) status by the RHS. These two beauties are cultivars of our native holly - Ilex aquifolium. They have beautiful non spiny leaves, so are easy to handle. 'Golden van Tol' has bright, sunny yellow variegation and both van Tols are self fertile, producing deep red berries every winter. 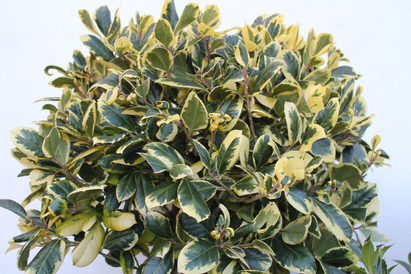 As the years have passed, (although generally with much milder winters again) the hollies have continued to become so incredibly popular, and we now stock a number of different varieties in various sizes and even have some smaller bushes of 'Golden van Tol' suitable for hedges or to start being trained into a topiary shape.

I. aquifolium 'Argentea Marginata', also AGM, has the most beautiful creamy/yellow margins which are flushed with pink on younger foliage. I. aquifolium 'Alaska' (AGM) can be pruned in to topiary or left to grow informally to produce a broad conical shape. 'Alaska' can be a brilliant variety for hedges. I. x altaclerensis 'Golden King' is another stunning variegated holly, so wonderful for bringing light into a winter garden. Despite it's masculine name it is in fact a berry producing female! With so many to choose from there will be a holly for eveyone's palette. 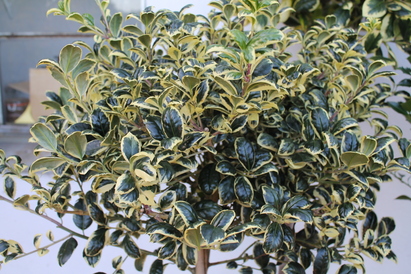 Although we tend to notice the holly more in the festive season, especially when they are adorned with berries and the foliage is gathered to deck the halls, they really do give great year round interest with their structural qualities and shiny foliage of varying textures. They are really easy to look after and thrive in most soils. As mentioned above hollies will tolerate salty coastal positions as well as urban pollution. They can be grown very successfully in raised beds or planters and can be shaped and trained. Another important benefit is that hollies will grow very happily in deep shade, the variegated varieties would prefer a liitle more sun to keep their wonderful colour but will still cope with some shade.

So, naturally, we are now hooked on hollies and over the next few years I'm sure we will continue to add to the collection.